A quick game on the PS2 over lunch

I've always enjoyed playing Halo on the XBox in the evenings, in ThoughtWorks' Bangalore office. Though this is seasonal - it depends on who is free in the evenings among those who play - a culture of playing computer and video games has been one of the things which I like about ThoughtWorks. At other times, AOE and UT have also been quite popular.

In Xi'an, I've found that a quick game on the PS2 during lunch is the norm. I took the photos below a few minutes ago when walking into the pantry to pick up some orange juice after lunch. 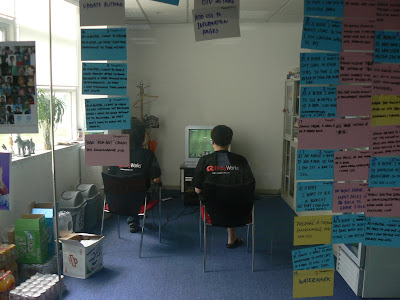 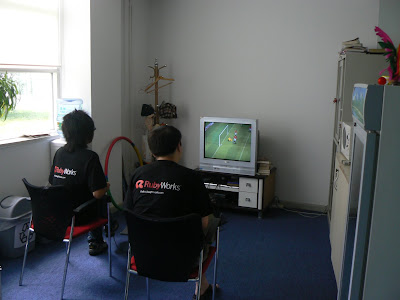 I've been widening my horizons by playing Tekken 5 after hours these last few weeks. Maybe I can resurrect that PS2 which is lying unused in the Bangalore office when I get back...
Posted by Unknown at Monday, July 30, 2007

I remember good times when we used to have LAN Parties (one of rare gaming culture we had) at Zensar after working hours. I'm yet to explore the world of consoles (The rise of console?! :P), Thanks for pointing to Halo and Tekken, I'll try it :)

Some of us used to be huge fans of Tekken 3( not too sure about the version in TW B'lore office), and we used to kik butt with the combo moves. People have even thrown the game controllers out of frustration of losing , in the middle of the night !

Thank you for keeping us updated on the exciting up-to-the-minute action in the TW offices.

An idea for your next post: your breakfast routine?

Thats Fun. But hey wait a minute, we at the bangalore office have started UT playoffs in the evening.

This has been going on for past 2-3 weeks. Typically starts with 4-6 players playing CTF and goes onto an all out deathmatch.

It gets more confusing when the TWU guys get onto the band wagon!!.

We are trying to brainwash more TWers to leave their work and join us!

Nice one. Guitar Hero was what resurrected the PS2 in the Chicago office! It has since become my favorite video game of all time dethroning Grim Fandango (PC) and Goldeneye (N64).

Just backing up Keshav: I'm in Bangalore for TWU and the UT competition has been fierce.